‘Reign of terror’: A summer time of police violence in Los Angeles | US information

L.Os Angeles police officers have continued to kill civilians at alarming rates and under questionable circumstances over the past three months, despite a summer of unprecedented activism and growth political pressure from the legislature.

Most recently, two MPs from the Los Angeles Sheriff's Department (LASD) fatally shot and killed a 29-year-old cyclist, 29-year-old Dijon Kizzee, who was on the run after officials tried to suspect him for an alleged "vehicle code violation." “To stop. The murder of another black man in South LA Monday was one of more than 10 deadly police shootings in the LA area since the George Floyd protests erupted in late May.

"If you kill in this climate when the light is shining on it, it's obvious that it is your intention," said Myesha Lopez, 35, whose father was killed by LASD in June. “I think the protests just make them more excited, more likely to trigger, more volatile and unstable. I don't think these officers have the ability to reform themselves. "

Police officers have produced reports of each murder which they believe warrant the use of force. However, civil rights activists and victims' families say the repeated bloodshed is a sign that the police are continuing to escalate conflict and resort to violence in even the most routine encounters – and that a more radical response is needed to prevent the next tragedy.

Constant killings during protests and pandemics

According to an analysis by the LA Times, police shoot an average of three to four people each month in LA County, or about 45 victims a year. According to the Youth Justice Coalition (YJC), an activist group, officials have killed more than 1,000 people in the county in the past two decades.

Despite the pandemic shutdown and increased awareness of police brutality, LA law enforcement agencies are killing civilians at a rate that seems pretty consistent with previous years. Police in the county killed at least 23 people from early 2020 to June, YJC says.

"It's like there's no end, it just keeps on happening," said Lupita Carballo, a 21-year-old YJC organizer who lives in south LA near the site of the recent murder.

Since late May, when mass protests broke out in LA, officials have shot and killed 11 people dead, according to Black Lives Matter LA, which also prosecutes murders. The sheriff's department, separate from the LA Police Department (LAPD) and patrolling outside of town, was responsible for seven of these deaths.

When they kill in this climate, even with the light shone on it, it is evident that it is their intention

LASD is the largest county police department in the United States with jurisdiction in nearly 200 different cities and has a track record of brutality and controversial killings, racial profiles, and corruption cases.

LASD scandals have accumulated at a dizzying pace this summer. On June 18, at the height of the protests, a LASD Compton MP killed Andres Guardado, an 18-year-old security officer who fled and shot five times in the back. Recently, a deputy whistleblower alleged that Compton was home to a gang of violent MPs who violated civilian rights and used excessive force.

In another LASD unit, more than two dozen MPs were disciplined in August for their ties to a gang of tattooed officers and a senior official was reassigned after saying Guardado "chose his fate". A lawsuit filed last month also accused LASD of fabricating a story and withholding evidence.

"It's a reign of terror," said Paula Minor, a BLM activist in LA. "The sheriff's department does what they want and they know no one will be held accountable."

In LASD's first report of the Dijon Kizzee murder earlier this week, a spokesman claimed he dropped a bundle of clothes while on the run, and MPs discovered a gun. The agency later alleged that he made "a move" in the direction of the gun and accused the man of beating a deputy, even though the officers were not injured. Witnesses denied the police account, and a family lawyer said it appeared the police had shot him 15 to 20 times. There was no body camera material.

"People run because of their innate fear of the police," said Marina Vergara, a South LA resident whose brother Daniel Hernandez was killed by police in April. She noted that some local residents arm themselves for protection: “If you are in south LA you will not be granted the second change. We are not seen as citizens protecting us. We are seen as criminals. "

The forgotten victims: "We have no answers"

Most of the summer murders received almost no coverage as limited information about them was released by police.

In a May 27 murder of a Latino man in North Hollywood, an officer was called to a "neighbors" dispute and a man was killed with a "sword." In a May 29 murder in northern LA, police said they approached a man who was "walking on the sidewalk," and when they saw that he had a gun, they brought him to the ground and killed him. On June 7, in a suburb of East LA, police killed a 38-year-old who had reportedly killed was hit by a train; The police said when they approached him he had a knife.

One victim who did not become a hashtag is Michael Thomas, a 61-year-old grandfather who was killed on June 11 by LASD MPs at his home in Lancaster, north of the city. LASD alleged that the officers responded to an alleged domestic violence phone call and that Thomas, who was unarmed, grabbed the officer’s gun. But Thomas' girlfriend said the two were just having an argument and that he was trying to prevent officers from entering his home illegally, citing the fourth amendment. 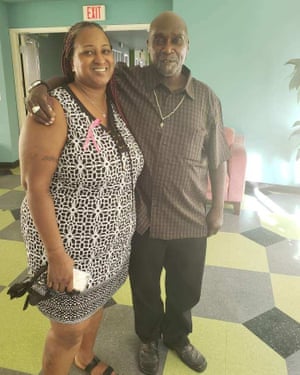 Michael Thomas, who was killed by police in June, and his sister. Photo: Courtesy Myesha Lopez

Myesha Lopez, one of Thomas 'five daughters, said her father saw a special on George Floyd the previous night and feared the police would shoot him: “He said,' I know if I open that door , will you kill me. & # 39; "

The officers appear to have done just that and fatally shot him in the chest.

Lopez said she believed the "fact that he knew his rights raised the officer's anger," adding that she was devastated to learn that his girlfriend wasn't even holding his hand or her father comforted when he was dying. "They didn't appreciate his life. They didn't care."

In the Guardado case, the authorities released important documents under heavy public pressure. But Lopez said she was struggling to get the most basic information from LASD, including the names of officers or an incident report. She said she even asked the department to allow the officer who killed her father to speak to her anonymously so that she can understand what happened in the past few moments: "We have no answers."

Even a simple acknowledgment of family pain would go a long way, she said, "We accuse these people of having authority over our lives and they are not even ready to say," I'm sorry. "

The sheriff's office did not respond to inquiries about the case.

"The system is not broken"

But Kizae's murder this week has once again sparked calls for a more radical and urgent response – dismantling the contested sheriff's division.

Regardless of Kizzee's final moments, activists said that an alleged violation of the bicycle should never result in death and that police cannot be trusted as first responders given how quickly they resort to lethal violence.

"We don't want to pay for more training. The culture is not going to change," Vergara said, noting that the bloodshed will only stop if officials lose the many safeguards that allow them to kill with impunity fears that this might not happen until the public in LA sees a video that resembles George Floyd's death, showing an entire interaction from start to finish, clearly showing that an officer disregards human life.

Lopez, Thomas' daughter also argued that the police should be disbanded, noting that LASD does not provide security for communities like theirs and that they often only engage in harmful acts when asked to help people in crisis or to help with other challenges.

"The officers are trained to believe that someone is trying to kill themselves and they are trained to kill," Lopez said, noting that she never called the police. "You can't say the system is broken. It does what it wanted. It works at an optimal level."

Lopez knew she wanted to engage in local activism after watching George Floyd's death. In June, she wrote to the mayor of Ontario, the southern California city she lives in, describing her own experience with the police over the years and the way officials mistreat black families like theirs. She urged the city guides to defend themselves against systemic racism: "I'm telling you about us so that you are convinced that we are important."

On June 10, a police officer replied to her email, thanking her for her words, but suggested that the George Floyd tragedy was unique and not a reflection of the officers' behavior.

The next day the police killed her father.